Criminal appeals lawyer in Texas John Helms clarifies the differences between an acquittal and an appeal. Learn why it is important that you are familiar with these legal terms. 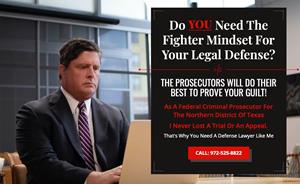 Don’t take a chance with an inexperienced attorney. Your FREEDOM is at RISK

Dallas, TX, Jan. 08, 2021 (GLOBE NEWSWIRE) — For many people, the legal terminology involved in a criminal case can be confusing or overwhelming. When your freedom is at stake, you might feel frustrated by an unfamiliar process and all the new words and phrases that go along with it.

One area that can spark confusion is the difference between being acquitted of a crime and filing an appeal after a conviction. Navigating the criminal justice system is difficult for most people, which is why it’s important to discuss your case with an experienced Texas criminal appeals lawyer as soon as possible.

What is Acquittal vs. Appeal?

In short, an acquittal means a person goes all the way through a criminal trial and is ultimately found not guilty. There is no reason to appeal their case because the court or jury has determined that they are not guilty of any offense.

When someone is acquitted, the government cannot appeal the jury’s finding of not guilty, but in some circumstances, the government can appeal jury instructions, rulings on evidence, and the like. By contrast, someone who is convicted of a crime has the right to appeal their conviction to a higher court.

If you’ve been acquitted of some charges but not others, you can appeal the charges that resulted in a conviction.

Depending on the circumstances of the conviction, you may also be able to file a motion asking for a mistrial due to an error or some sort of prosecutorial or juror misconduct during your trial.

When someone files an appeal, they ask a higher court to review the trial court’s decision and to change it or reverse it, or to send the case back for a new trial. In most cases, the defendant appeals the actual conviction.

However, there are instances where a defendant might appeal the sentence rather than the conviction.

Courts of Appeal in Texas

Every court of appeal in Texas has a chief justice and a minimum of two additional justices that hear cases as part of a panel. Under Texas law, there can be up to 13 justices on a court of appeal.

How an Appeal Works

In state court, the appeals process typically starts with the defendant filing a “notice of appeal” within a certain timeframe.  This is a short document saying that the defendant intends to appeal. It’s very important to file the notice of appeal before the filing deadline, as missing this deadline can result in the defendant losing their right to an appeal.

After the notice of appeal has been filed, the defendant will file a “brief,” which is a written argument identifying errors that the trial court made and arguing why the errors justify a new trial, a reversal of the conviction, or other relief.

Once the defendant files their brief, the government will respond with its own brief, which responds to the defendant’s brief.

After that, the defendant can file a reply brief, which responds to the government’s brief.  A reply brief cannot raise new arguments or claimed errors that were not made in the original brief.

The appeals court, which is made up a panel of judges, will then either decide the appeal just based on the briefs, or the court may hear oral arguments from both sides. During oral argument, it’s typical for the judges to ask each side questions about their position on the issues in the case.

It’s important to note that the appeals court can only review the parts of the trial case in which the defendant asserts that the trial court got it wrong. That is, the appellate court can’t simply redo the entire trial.  An appeal is not a “second opinion.” The appeals court will uphold the conviction unless there was a serious error, even if the appeals court judges might not agree with the outcome.

If the Court of Criminal Appeals refuses to consider the appeal, or if it upholds the conviction, the defendant may be able to ask the Supreme Court of the United States to hear their case. However, the U.S. Supreme Court accepts very few cases, and only those that raise important legal or constitutional issues that would apply to cases around the country.

Can You File an Appeal If You Pleaded Guilty?

The fact that you pleaded guilty does not technically mean that you cannot appeal.  However, the situations in which you might actually win on appeal are very limited, because you have admitted you are guilty.  In fact, in most plea agreements, the defendant gives up the right to appeal as part of the plea bargain, except in extremely limited circumstances.

When a person or a family member comes to me about a possible appeal after a guilty plea, I normally offer to investigate the possibility of an appeal for a reduced rate rather than agreeing to file an appeal brief.  If I investigate and believe that there is no basis for an appeal, I tell them. If I think there is a possible basis for an appeal, we can discuss whether they want to proceed. I do this is because it is rare that there is any real basis to appeal after a guilty plea.

This news has been published for the above source. Law Office of John M. Helms [ID=12599]

Disclaimer: The information does not constitute advice or an offer to buy. Any purchase made from this story is made at your own risk. Consult an expert advisor/health professional before any such purchase. Any purchase made from this link is subject to the final terms and conditions of the website’s selling. The content publisher and its distribution partners do not take any responsibility directly or indirectly.  If you have any complaints or copyright issues related to this article, kindly contact the company this news is about.

You may have missed